Alright. I apparently have grown a massive pair of testicles because I’m gonna talk about something nobody ever wants to talk about, especially women, but that is a huge issue with many diseases including antiphospholipid antibody syndrome (APS) ~ the blood disease that almost took my life and did take my leg but that did not take my sass:

The reality with APS is that most patients and doctors seem to only ever really worry about blood clotting if the clots that are present are big enough to do damage to major organs or threaten your life and ~ particularly frightening to me ~ most are completely unaware of the plethora of symptoms and risks that are the result of continuous microclotting including the development of multiple forms of dysautonomia (dysfunction of the autonomic systems within the body, like breathing and blood pumping). In fact, at times I wonder at the sheer amount ignorance about microclotting as a mechanism at all.

Microclots can be as small as even two red blood cells. In the superhighway of most arteries and veins, two cells stuck together are not that big of a deal because they’re not going to stop the blood from flowing, but the smallest capillaries in the body are big enough for only a single red blood cell to pass at a time. Two little cells stuck together are able to block the blood flow to one of those capillaries and therefore the flow to whatever they feed:

Having blood flow restricted for a day or a few hours isn’t going to kill you but after weeks, months, or years damage will invariably be done and there will be consequences. Even when doctors and patients understand the mechanism of microclotting, its presence is difficult to prove… unless the smallest symptoms are noticed and taken seriously. Unfortunately, patients who are confirmed as having antibodies associated with this disease remain untreated until their lives a threatened by it. I know of many patients with this disease who spent as many as 15 or 20 years without treatment or with only minimal treatment because both doctors and patients believed if they weren’t having DVTs in their arms or legs, weren’t having strokes or pulmonary embolisms, weren’t having miscarriages, and weren’t having heart attacks because of clots in or around the heart that they were free and clear. Safe. After all, no one wants to be treated unnecessarily.

If you think about it, in the face of life threatening blood clotting, who among us is going to worry about hair loss? I mean, it takes a special kind of vanity to focus on how many hairs are on the pillowcase in the morning or hairbrush at night when having strokes, embolisms, DVTs, or any of the dozens of symptoms of major clotting, right?! Death or hair loss?! Which is deserving of time, attention, and worry?

Don’t get me wrong, I worried but even my strong willed sass was largely unwilling to pursue that line because of the judgment I felt over being focused on something others had decided was unimportant in the scheme of things… and I’m the kind that likes to look good all the time. There was a time when I wouldn’t even take out the garbage without my signature red lipstick and high heels. Some people travel in sweats, I travel in heels, with all the stylish clothes, and accessories and handbags; after all, if someone is gonna be randomly bumped to first class it should be me, right?! When I hospital, I think we’ve established that I even hospital in style too: 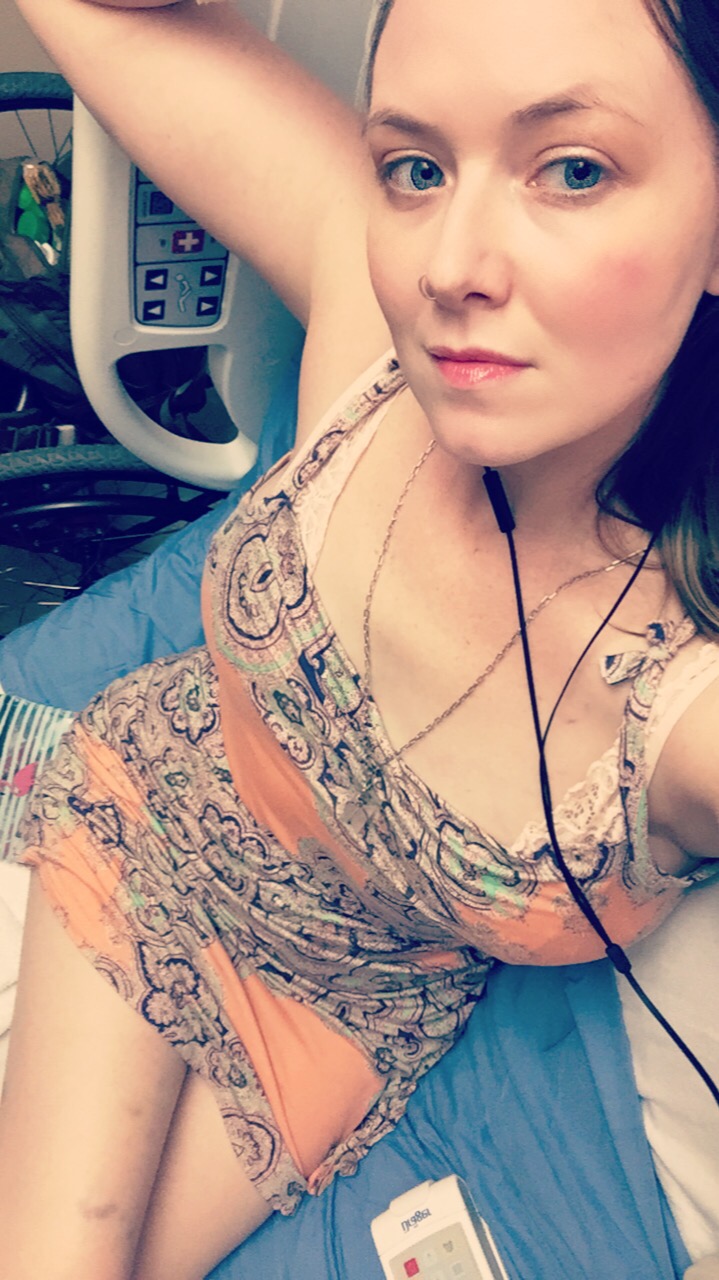 But the honest truth is that when faced with spending energy worrying about the possibility of hair loss or some other seemingly small symptom, or spending the same energy searching for answers, treatment, and health I would much rather focus on the not dying bit and leave other things for another day. I don’t think I’m alone in this sentiment, which is why that is exactly what I did for several years.

I prioritized issues and focused on the most urgent and threatening ones:

Excruciating pain that could not be controlled on any drug available

While I focused on the big things, I still noticed the little things but I just didn’t push hard for answers about them:

Chronic anemia and being covered in bruises

It’s not like I didn’t see it happening, the hair loss I mean. I asked friends and family about it at times, wondering too if it was in my head and I was just finding something other than death to worry about or if it was real, but everyone I asked denied to me that it was happening. That was the worst response they could have given me.

It left me feeling crazy.

It left me feeling insecure and doubting my own powers of observation.

I knew I was fighting for my life but I also knew that in that fight my hair was a casualty and it was a casualty that even when brought to my doctors was dismissed.

Dismissal by everyone I brought my hair loss to was motivated by kindness, that much is true and I can love and appreciate those who were trying to spare my feelings. The attitude among everyone I’ve questioned on the subject was akin to, “You were already going through so much I didn’t think you needed to worry about THAT too,” but I was worried. I saw what was happening just as clearly as everyone else but I was just about the only one willing to say something about it, the only one willing to address it.

Telling someone that their observations, experiences, and well founded worries are in their imagination is always the wrong answer as far as I’m concerned.

Better a hard truth than a beautiful lie.

What bothers me the most about having it denied to me is not the hurt about the way those denials made me feel or that the people I relied on didn’t think I was strong enough to handle truth; don’t mistake me though, those feelings are some I’m still struggling to accept and address. What bothers me the most is that medically the loss I experienced was connected to all the other things taking place in my body and my very real and very pertinent symptom was said to be unimportant in the scheme of my diseases and recovery, not worthy of time, attention, or pursuit.

My symptom ~ in addition to my fear and my vanity ~ was unimportant and invalid.

Let me grab my soapbox for a moment:

Telling any human being their experience is invalid for any reason is a dick move.

Telling any patient with a plethora of chronic and uncontrollable autoimmune and dysautonomic symptoms and conditions that their weird ass symptoms are unimportant isn’t just a dick move, although it’s still that, it’s foolish and dangerous for them.

The reality is, that my seemingly innocuous symptom ~ like all small symptoms ~ was the canary in my proverbial coal mine.

Denying and downplaying its existence left me feeling like I was living in a Monty Python sketch where my canary was very obviously dead but everyone kept insisting it was just sleeping.

My hair was thinning because microclots in my blood were starving the hair follicles. No one seemed to pay close attention to it but me and for me it was a devastation that was the insult to my injuries. I’d always had scads of long, beautiful, healthy hair until suddenly there was half as much of it covering my scalp as there had once been but because it wasn’t life threatening it was ignored.

No symptom, no matter how small, should be ignored or denied.

If you have a concern you should address it. It’s your body and your life. Call me crazy but I think you’re worth taking care of. I’m sure any health care provider reading this could reasonably be assumed to be face-palming themselves thinking, “Shut up! I don’t want to have to worry about every Dr. Google coming in with complaints about every ridiculous little thing!” Just remember, Mr. or Ms. healthcare professional, those crazy patients write your paycheck and keep a roof over your head. Besides, what happens when you listen and explore only to find some major underlying condition and you help to save their life because they were brave enough to ask for help?

With reduced stress and with a blood thinning regimen that actually works to stop my clotting, my hair is starting to grow back. I have short hairs filling in all over my scalp as the once seemingly dead follicles heal and begin to do their work once more leaving me looking a tad disheveled and fuzzy all the time while my hair fills out again. I’m not bald and the hair doesn’t come out in handfuls like it did before, but there is still less of it than there used to be and if my hair is styled a certain way you can see how extreme the hair loss still is despite the fact that it is far better than it was last year at this time.

I’m the most strong willed and adamant person I know. This week at physical therapy, which is populated by more than 90% military men, I overheard a group of guys stating I was the cockiest person there and my response was to declare with a wink and a smile that it was only so because my balls are so much bigger than all of theirs, hence their location not between my legs but instead on my chest. And yet even I, with all my sass, Little Miss Leather Britches herself, lost my voice on an issue that was important not only because it was proof of what was happening within but because it impacted my confidence, my chutzpah, and my happiness.

God help the person who tries to brush off my concerns again, that’s all I have to say.

11 thoughts on “Listening to the Canary in the Coal Mine”

GwenAnn is a full time barista in pursuit of a graduate degree and each piece written takes at least 8 hours of work before it can be published, none of which is paid. Donations made on Ko-fi go to supporting her while she creates the content you love, keeping food in the stomach of this starving artist. Nothing more, nothing less.

If you like what you see and it moves you, please consider making a donation and buy her a coffee here. One time only and monthly donations possible; Ko-fi takes no fees from donations made to creators.

Listening to the Canary in the Coal Mine